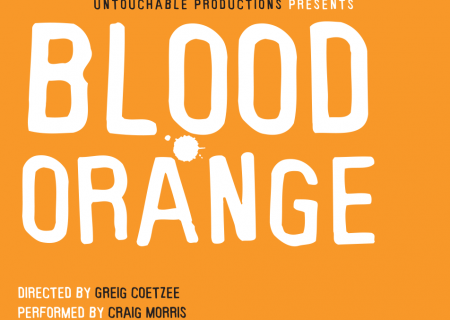 The story of Gecko, a boy who has an oblique, out-of-sync way of seeing the world, of his childhood among the green hills of Natal and of his jagged school days in the Cape, where the Simonsberg drinks the Blood Orange sun at dusk. James Dean and Wilbur Smith have two-bit parts in this drama that begins with man landing on the moon and ends with Mandela riding a mermaid to freedom. A Zany “Catcher in the Rye“!Festival favourite Greig Coetzee is well known to Natal audiences, and has performed extensively here over the last decade. He has recently decided to devote more time to his first love, writing, and less to performance.

Craig Morris was schooled at Port Shepstone High before studying at Rhodes University under Andrew Buckland and Prof. Gary Gordon as a founder member of The First Physical theatre Company. Festinos will remember Craig from Attachments 1-6, and Hero (directed by Andrew) which performed at Hilton last year.

Troy Blacklaws is the author of the original novel Blood Orange. He was born in Pinetown, studied at Rhodes and now teaches and writes in Germany! He recently flew out from Germany to attend the premiere performances of Blood Orange in Grahamstown!

Three very distinctive creative voices have come together to create, in collaboration, what is fast becoming a contemporary Physical Theatre classic!