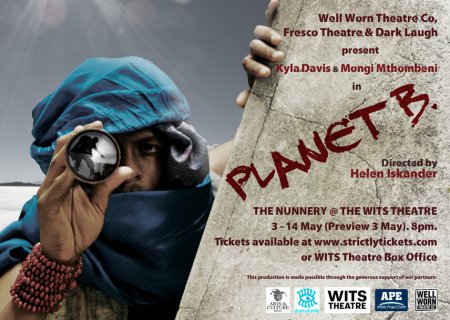 Sometimes, in war, famine and radical times of change, there is someone still standing. And sometimes, they are not alone. Amongst the dunes of post-2050 earth a mirage of humanity glimmers in the heat.

Planet B was originally performed as part of the SA Devised Season at WITS Theatre in 2011 and subsequently went on to tour to the National Arts Festival, Grahamstown 2011 and the Out The Box Festival, Cape Town 2011 (where it received a special mention for Excellence at the Handspring Awards.) The play also formed part of the official cultural programme at the international COP17 conference on climate change in Durban (Dec 2011).