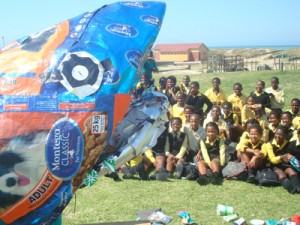 Rubbish Wrap uses waste as a resource for the imagination. A talking tree’s leaves make homes for worms. A bottle top shark sings “Free the Sea!!” A magical musical recycling machine lets some surprises emerge at the other end.

Rubbish Wrap is a play about the creation and cycle of waste and the transfer of energy in nature’s own recycling system from one organism to another through the food chain. It contrasts the chain of consumption from raw materials to the dump sites of the industrialised world. The play enables learners to break the consumption and waste cycle through participation, fostering efforts to reduce, reuse and recycle.

Rubbish Wrap is 45 minutes in duration and is suitable for Grades 4-9.

Jungle Theatre Company was commissioned by City of Cape Town Environmental Resource Management Department to create a short 20 min play to complement the waste chapter in The Smart Living Handbook in 2008. Rubbish Wrap was toured to schools as part of the Youth Environmental Schools’ (YES) Waste Wise Week in 2008 and 2009 and was accompanied by a 45 minute workshop. For the YES Blue Flag beach programme in March 2009, which focussed on marine and coastal pollution, the play and workshop were combined in a 45 minute interactive play and returned to the Blue Flag campaign in 2011.

The show was very educational and what [the learners] learnt today they will be able to use at school and at home. – St. Louis Primary School