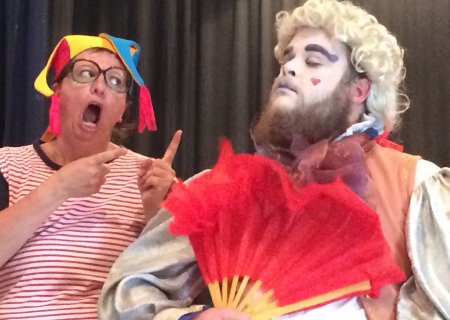 Emperor Loxly’s court is in turmoil, because his designer quit the day before his birthday, and left His Highness without a new show-stopper outfit. That is, however not the only problem. The much bigger issue is Wonty, the unenthusiastic court jester, who stole the emperor’s prized watch, and is planning to take over the kingdom. The emperor’s loyal servant, Wilma, tries to maintain the status quo: keeping Loxly happy and Wonty quiet, but then Wonty is banned, Loxly almost loses his mind, and a stranger makes his appearance. Can the smooth talking, never-heard-of designer called Wontier, save the day?

In the workshop, learners evaluate all the characters in the play, and decide who displayed good leadership skills. They also apply it to their own environment and lives.

We saw that our teacher is a good leader, not like the emperor. We are important to him. And that we can also be good leaders ourselves.