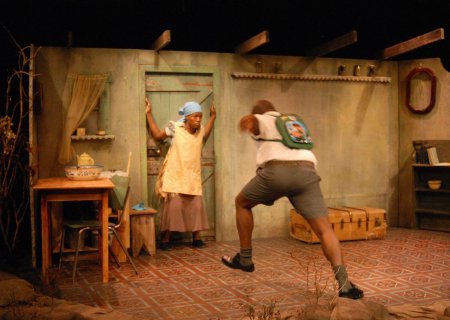 The Ogreling / Izim’elincinci, by acclaimed French Canadian playwright, Suzanne Lebeau and directed by Yvette Hardie is a rich visual feast for learners, with set and costume design by Illka Louw and shadow puppets by Daya Heller. The production can be presented in English or in isiXhosa (translated by Sindiwe Magona). It introduces learners to exploring moral dilemmas and choices through the exciting story of a six year old son of an ogre (or izim), who discovers his nature and decides to escape his destiny. To do this, he must overcome three ordeals. The Ogreling explores the never-ending struggle between good and evil that resides within each of us.

Drawing on ntsomi storytelling traditions, this haunting and magical tale crosses cultures and continents to bring you an audacious and beautiful creation… that gives us all we deeply need to live and grow…

The production is a strong support to the Life Orientation curriculum for Intermediate and Senior Phase learners which teaches the use of acquired life skills (self-management, problem-solving, personal discipline) to achieve and extend personal potential to respond effectively to challenges in the world. It can also support the Language curriculum, as well as introducing learners to aspects of the Creative Arts. The published text (in both English and Xhosa) provides a rich resource for language learning, language extension and creativity.

The touring of the production to the Eastern Cape in 2012 is an ASSITEJ South Africa project.