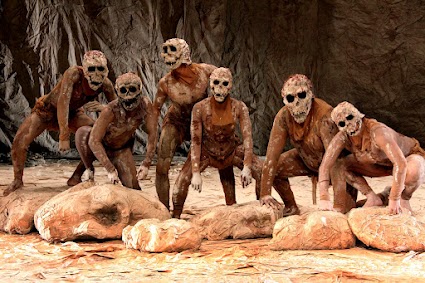 A new play by Craig Higginson

First commissioned by the National Theatre, London, for the 2012 Connections Festival

This powerful and poetic new South African play is situated on a farm in the Cradle of Humankind, where much of the world’s pre-human remains have been found. It takes the audience down into the vast network of caves where the three-million-year-old hominin Little Foot was discovered. Out of sheer co-incidence, the production will be released at the same time that Little Foot’s remains will finally be freed from the rock. It has taken thirteen years to extract the hominin’s calcified bones, using brushes and dentists’ drills.

In Higginson’s play, we experience the caves through the eyes of a group of young South African university students – who went to school together and are having a reunion on New Year’s Eve, exactly a year since they last saw each other. One of them (Wizard) brings along a new girlfriend from England (Rebecca). He wants her to meet his oldest friends, not suspecting that a terrible trap is being set for him. What starts as a practical joke soon leads to a series of events that appear to have tragic consequences. As the students delve deeper into the caves – and we travel ever deeper into their psyches and their shared histories – a Chorus of ancient hominins steps through the walls of the caves. The play finally dramatises the coming together of our most primal and contemporary identities

Little Foot draws on Greek theatre, Philosophy, Palaeontology and South African mythology to create a powerful portrayal of modern relationships. Not only does the audience come to a deeper understanding of their common ancestry, but the play powerfully illustrates how the best and the worst of us has its roots in the ancient past, and how these two capacities are carried through into our contemporary democracy.

Since we first learned to control fire, light has been used to satisfy our best and our worst impulses as a species. It is what we do with the light handed down to us that we define ourselves. The theatre – which provides a darkened space into which we introduce light for the telling of our stories – is surely the perfect place to explore these themes and concepts.

For this production, writer Craig Higginson and director Malcolm Purkey are collaborating with Standard Bank Young Artist of the Year award-winner Neil Coppen to create a multi-media event that will include a composer, videographer, sound designer, sculptor, editor, choreographer, as well as a lighting, costume and set designer. Huge cloths will be used to create different spaces and textured surfaces, as well as being used for surfaces for video projection and shadow puppetry. The Chorus will be created using masks, sculpture and projection. In both content and form, this promises to be a unique piece of storytelling that will redefine the boundaries of contemporary South African theatre.

Previous collaborations between writer Craig Higginson and director Malcolm Purkey include the internationally acclaimed plays Dream of the Dog and The Girl in the Yellow Dress – both originally produced by the Market Theatre.