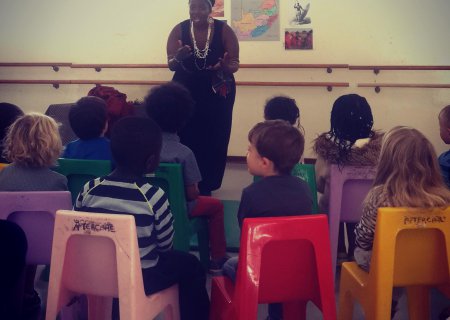 The show uses storytelling to relate the ancient and not commonly known history of the roots of the South African people. History of SA: Quick-Quick One Time! locates the different cultures through the various provinces, giving the learners an in to geography, taking them through celebration ceremonies, ancient art, music and celebrates the South African languages. The show in its current incarnation is suitable for learners from the age of 3 to 7, but can be crafted and extended according to the schools specifications to be suitable for ages between 3 – 13, elaborating more on the different aspects of cultures, ranging from cuisine to traditional garb, to current dynamics (i.e. a modern South Africa in which citizens are not bound to their homelands but move freely in the country to find employment, to marry into different cultures) and to widen their knowledge of their country. The piece is interactive therefore smaller groups of between 20 to 25 children are ideal, however the piece can be crafted for larger groups with less interaction and more storytelling.