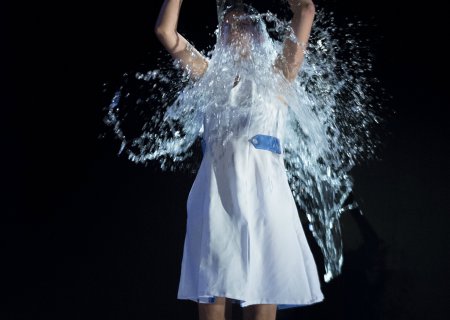 WHAT THE WATER GAVE ME

This powerful piece of authentically South African theatre is an elemental exploration, which digs up gestures and stories that have been buried in the darkness of Cape Town’s history. Flowing from lush stories of ancient majicks to gritty tales of urban terror, the play traces the stories of four characters, with a storyteller who weaves their worlds together. Through the resources of imagination, the characters are able to transfigure their existing realities. Awarded a SILVER Standard Bank OVATION at the National Arts Festival 2014 this production has been called “as beautiful as it is compelling” and “a performance worth seeing.”

Cheraé Halley was born in the Eastern Cape, East London and moved to Johannesburg where she completed both honours and masters in Dramatic Arts at the University of the Witwatersrand.  She completed three years of South African Sign Language studies as an extra course. Having studied Applied Theatre and Performance Studies, Cheraé has a burning desire to create theatre with both Deaf and hearing people with particular interest in HIV/AIDS and using drama as process to educate and dialogue on the matter.  In 2010 Cheraé was awarded the Drama For Life scholarship through which she completed her award winning, practice lead research MA research.

In 2012, having a passion for the stage, Cheraé performed in the recently published controversial play The Merry Wives of Zuma written and directed by Pieter-Dirk Uys.Cheraé is a member of the DFL Playback Theatre company in South Africa, and has completed both core training and advanced training courses in Playback Theatre.

Cheraé currently is the project officer for the HIV/AIDS Deaf awareness project at GALAGALA (Gay and Lesbian memory in Action) which travels across Deaf schools in Johannesburg using educational theatre in addressing HIV/AIDS.  She facilitates Applied Theatre workshops for the University of Johannesburg Art Centre and since 2013,Cheraé has been coordinating and lecturing the Applied Theatre Studies IIIA course, (now including IIIB) at Wits University under the Division of Drama For Life.