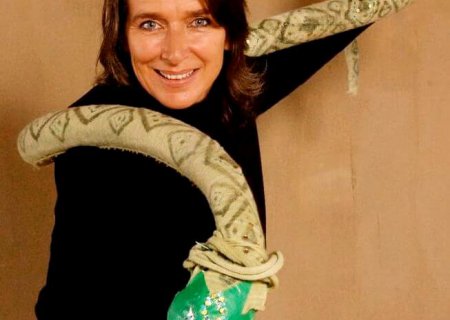 Despite being predominantly French-speaking, Cameroonian audiences were charmed and entertained by the new South African children’s musical Snake Magic when it was staged in Yaounde recently as part of an international arts festival.

“It is a work that is able to transcend language through its use of puppetry and music and seems to enjoy a universal appeal,” says its creator, well-known Cape musician Heather Mac.

Adapted from an African legend, the play was selected for staging at the African Festival of Children’s Theatre in Cameroon last month. “As only 20% of the population speaks English, we were concerned that some of the children may not understand the narrative. I was delighted to be proven wrong,” she laughs.

Mac relates that Cameroonian children became so emotionally engaged with the story, that during one performance in a scene when one of the characters is frightened, audience members stood up and told her how sorry they were. “Some even gave the cast member fruit and snacks to help her! It brought tears to my eyes that in country where poverty surrounds everybody, such generosity exists.”

Snake Magic features Deon Nebulane, Lindelwa Kisana and David Muller is currently on at the Baxter’s Sanlam Studio at 11am until December 20.

During its first run at the Kalk Bay Theatre earlier this year, critics were extremely complimentary about the way Mac has breathed life into this uniquely African tale. “We’ve basically integrated a vibrant musical score with an adventure-filled story and in the process we’ve created the ideal holiday fare for the whole family,” she says.

Mac and the cast feel the show has grown since its first staging and believe its new incarnation and has been polished in such a way that it gets children in the audience to really engage with its underlying message. “Snake Magic tackles many different current issues that face children today, namely bullying, jealousy, gender conflict, animal rights and conservation,” says Heather.

“We hope that the play is one of the ways we can help nurture respect within children by highlighting the value of their environment, ‘mother earth’ and the importance of being kind, honest and caring within our family and our community.”