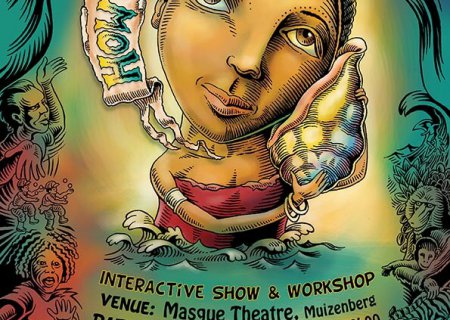 The Magic Shell is set in ancient times on the Wild Coast, before people knew how to tell stories. Manzandaba and Zenzele, a married couple, are two of the first people. They go on an adventure in search of stories that lead to magical creatures under the ocean…………

African stories and languages don’t get enough attention with entertainment flooded by Western culture. However, our rich heritage of folktales offer life lessons through the portrayal of human/animal characters. Children have an intuitive connection with wild animals and different languages. Their imaginations are ready to make the connections between wild life and human characteristics. These heart connections are fostered by this portrayal of a folktale. In

The Magic Shell  the theatrical representations draw young children into a world where animals and humans are connected. Their imaginations become rooted in culture and nature. They are prepared to make the folktale their own. They become ready to tell this original story in their own words and in their mother tongue.

The Magic Shell is 45 minutes in duration and suitable for children aged 4 and up (grades R to 3).

An accompanying workshop is also available.

The Magic Shell (formerly How Stories Began) made its debut at the Masque Theatre during the July school holidays in 2015 and was performed at the Cape Town Fringe Festival; RASA and the Storievertelfees during September. More recently, The Magic Shell was performed as part of the Muizenberg Festival in 2017.