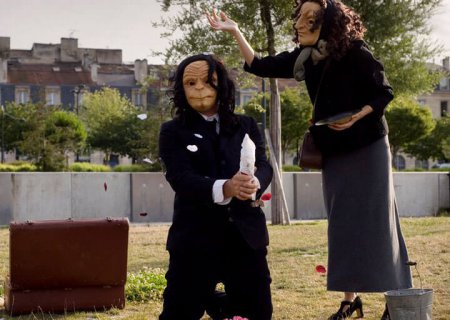 [pullquote align=right]Magic realism with full expressive masks [/pullquote]Médéa and Simion, two aged characters coming from another world, come back to give homage to their beloved child. Accompanied by a cello they first portray us their everyday lives: their binding affection, their habits…After which however, all suddenly changes. The memories bring back the sadness. They have come back to find peace again, but at which price? Simion is responsible for the death. Médéa must sacrifice Simion : is he innocent ? Or is he guilty ? Only the Gods can decide…

[pullquote align=left]Death. Love. Sacrifice.[/pullquote] The prelude to the original creation of the piece “Flowers of Silence” was the song by Jacque Brel: “Les vieux” (The aged). This visual piece (non-verbal) is intimate and relooks at the family dilemmas of the Greek tragedies, where love, death, jealousy and vengeance lie. During this however the nuances of the play could well make the audience even laugh. Therefore the comic does indeed meet the tragic. The audience reconstruct the story by the elements given (principally through objects and the music, the latter even allowing for a ‚Flashback’, giving the audience even more the means to dive deeper into the strange universe of this couple). The masks, half-animal half-human, express sadness and madness however this couple remains profoundly poetically touching and humane.

The show brings diverse audiences together as it is performed on the street, in the townships as well as in schools. It is a form of popular theatre, told simply for all to understand. The message in the piece is not a question of moral, but rather one of observation and reflection, without answers, upon the human condition: who is culpable? Where is there place for destiny in our lives?

An ancient forgotten world falls upon our new modern world.