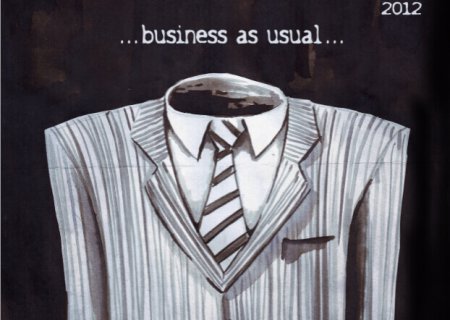 OfficeBLOCK follows four co-workers in their individual battle for power within the cogs of the corporate world. Trading in currencies of greed and self-promotion, they all make their plays at moving up the food chain…until being faced with the same question: how far would they go to get what they want?

Taking on life around the office water cooler in a series of captivating vignettes that lift the lid on the tyranny of conformity and the culture of corporate greed. The series is set in the seemingly familiar world of white-collar workers and dreary office surroundings where everything is business as usual…or is it? In a battle between personal and personnel, four co-workers negotiate life within the corporation, and the audience watches as things unravel at the suit-seams when the hunger for greed and power leads to the point of no return.

Featuring FTH:K’s signature brand of visual theatre, OfficeBLOCK is a rollercoaster of dark humour and non-verbal narrative, taking a poignant journey into the politics of people.